The City of Mitchell is distributing new blue recycling containers it plans to use when it takes over residential recycling the week of January 6th. However there appears to be a problem as the lids on a large number of the new containers aren’t fully closing. 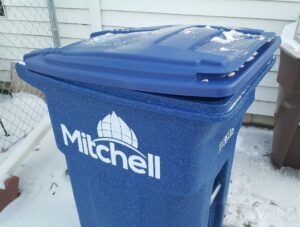 Mayor Bob Everson said Sunday evening the lids are apparently sensitive to the cold. “As it turned out they delivered them in the cold weather rather than the warm weather and the lids are kind of shrunk if you will,” said Everson. “As they get sun on them and the temperatures warm, they should self-conform to the top of the recycling container.”

Everson says Public Works Director Kyle Croce and Street Department Superintendent Kevin Roth told him this happens regularly when new compost or garbage containers are delivered in cold weather. He says if residents still have a problem with the lids after the weather warms up to contact the city.

The city hosted a public information meeting last Thursday in anticipation of the roll-out. The new blue recycling containers come in 64 gallon and 95 gallon sizes and are similar to the current garbage and compost containers.

The city will pick up recycling every other week on the same day as your garbage collection.