Several Mitchell City Councilors along with Mayor Bob Everson and other city officials took a field trip Wednesday to get at first-hand look at the city’s recycling program.

First, the group boarded a Palace Transit bus and followed the recycling truck as it made several pick-ups on West Fourth Avenue.

Then it was on to the recycling facility in the old landfill east of town where the truck unloaded several tons of mostly recyclable material. 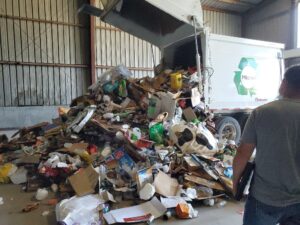 Street Superintendent Kevin Roth explained a group of workers separates the recyclables from non-recyclables. He says there’s still confusion regarding what can and can’t be recycled. 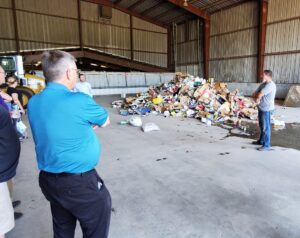 Public Works Director Kyle Croce agreed and offer examples of non-recyclables. “If you think about, Styrofoam they market themselves it as recyclable, and so we automatically we think okay, I’ll just throw it in there,” said Croce. “But we can’t take it.” He said clear plastic fruit containers and other items that have a certain mark on them are deceptive and not recyclable.

Wednesday’s load even included a children’s bicycle which obviously isn’t recyclable. In a usual week around 20 tons of recyclable material is transported to Sioux Falls for processing. 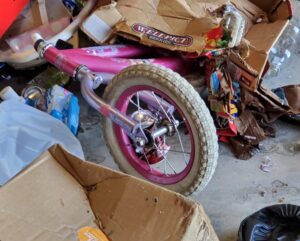 Children’s bicycle is not recyclable yet ended up in the bin.

Roth says the city has placed recycling receptacles at Hitchcock Park and the city’s compost site located at 1400 West 8th Avenue. There’s no charge for dropping off recycling at either location.

For additional information regarding the city’s recycling program call 605-995-8465 or on-line at cityofmitchell.org.