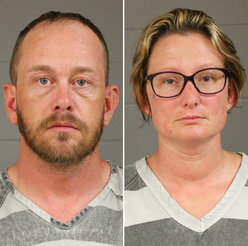 SIOUX FALLS, S.D. (AP) — A South Dakota couple have pleaded not guilty to charges that they gave four children illegal drugs and zapped them with a cattle prod to get them to comply with orders. Thirty-six-year-old Lance Long and 40-year-old Crystallynn Long of Sioux Falls made their initial court appearances Monday.

The Longs pleaded not guilty to several counts, including aggravated assault with a dangerous weapon, distribution of marijuana to a minor, distributing a controlled substance to a minor and abuse or cruelty to a minor. Authorities say the alleged abuse had been going on for several years and involved boys ages 17, 13 and 11, as well as a 15-year-old girl.