A documentary film focusing on Hansen Wheel and Wagon Works, located just north of Mitchell, will have its world premiere at the Luxury 5 Cinemas in Mitchell on Wednesday, March 30.  The film, “Wagon Master: Hansen’s Hand Crafted History” was sponsored by the SD Humanities Council and the Oregon-California Trails Association.  It will show later South Dakota Public Television and other public television stations across the country. 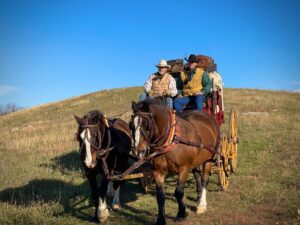 The festivities will start with a “Meet the Filmmakers” Reception at the Carnegie Resource Center at 1:00 P.M.  The events continue at 2:15 at the Luxury 5 Cinemas with a welcome and introduction by local and state dignitaries and a showing of the film.  A question-and-answer period with the filmmakers will follow the showing.  There is no charge, and the public is invited to all the events.  Reservations are not necessary.

They don’t make em’ like they used to. That is a phrase that Doug Hansen takes to heart. Doug has been custom building and restoring ox, mule, and horse drawn vehicles from the 1800s and early 1900s since 1978. He and his team make everything from scratch, using many original 19th century hand tools and techniques that those who mastered this craft during the heyday of emigrant trails also used. It’s an intensive effort, from designing by eye, to shaping the wood, blacksmithing the iron, upholstering, painting, and detailing. A Concord Stagecoach takes 1200 hours to build, no small feat.

The result is “Wagon Master: Hansen’s Hand Crafted History,” a 25-minute profile about Doug and his business, his connection to 19th century culture and technology, and the vehicles that powered the era. The finished documentary is set to premiere at a special event in downtown Mitchell on March 30th. VIP guests and the public are invited to the premiere screening at 1pm at the Luxury 5 Cinemas at 209 North Lawler Street. A question-and-answer session will follow the screening. Doug’s custom-built Passenger Wagon, or ‘Mud Wagon,” the most common form of transportation in the old west, will be on site for photo opportunities.

Travis Boley and Kevin Marcus fostered a partnership between The Oregon-California Association and Knowledge Tree films in February 2020 to produce a series of documentary projects, educational videos, and social media content highlighting unique aspects of the historic trails, people, and events from 19th century American history. “Wagon Master: Hansen’s Hand Crafted History” is the latest in a series of these projects.