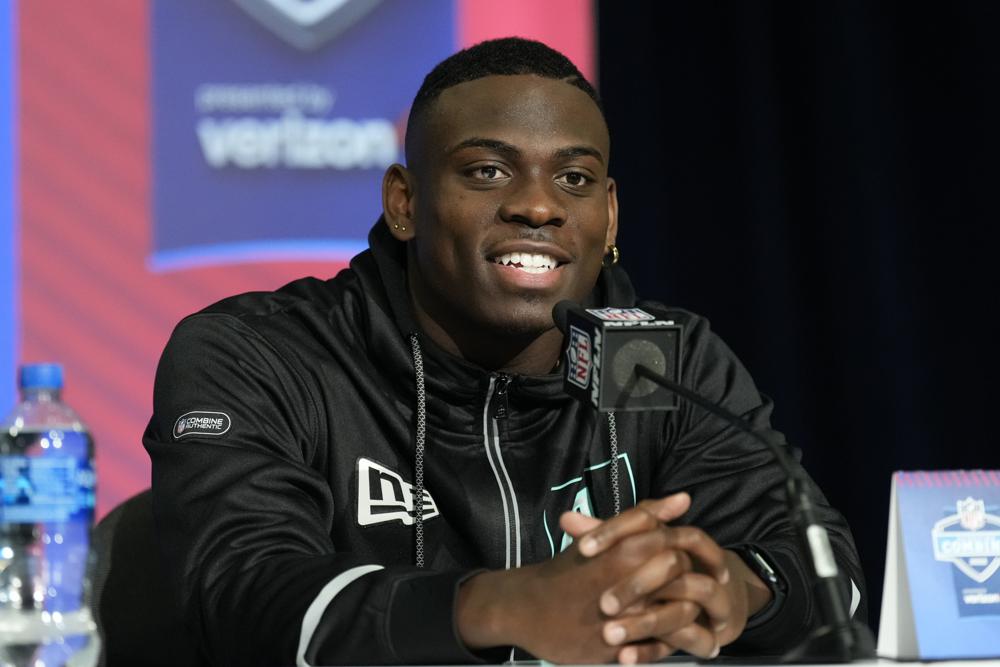 Much like his predecessor, new Minnesota Vikings general manager Kwesi Adofo-Mensah showed he is not worried about moving around the draft board — even if it means dealing with division rivals.

Adofo-Mensah was again active Friday early on the second day of the NFL draft, making two trades and drafting Clemson cornerback Andrew Booth Jr. and LSU guard Ed Ingram in the second round and, finally, Oklahoma linebacker Brian Asamoah in the third.

Minnesota made three total trades on the first two days of the draft, including deals with NFC North foes Detroit and Green Bay. The Vikings ended up filling their most pressing need at cornerback with Booth and added depth at guard and linebacker with five more picks set for Saturday in Adofo-Mensah’s first draft with the team after taking over for Rick Spielman.

“The phone rings, you pick it up,” Adofo-Mensah said. “Obviously, we thought heavily about, again, doing another trade in our division for another receiver. To that point on the board, I don’t believe we had a corner. Believe me, the gravity of that was not lost on me. But again, you’re supposed to make calculated decisions and we did, and ultimately I think we were rewarded with what we did in the end.”

Minnesota started Friday with the 34th overall pick, the second in the second round, but sent the pick to Green Bay for the No. 53 and 59 selections. The Vikings then traded Nos. 53, 77 and 192 to Indianapolis for No. 42 to draft Booth and added No. 122 in the deal.

Booth, who entered the draft after his junior season, might have fallen due to medical concerns. The 6-foot, 194-pound cornerback had 37 tackles and three interceptions in 11 games last season but said he played through injury.

“I didn’t do the combine or the pro day, so I kind of made it hard for everybody to love me,” Booth said. “I know everybody really, really liked me, but I was hard to love, though. It was tough, like, because I know I’m more healthy than the guy that was on tape that going into these meetings everybody is putting up. Ten times better than the cat on tape.”

Minnesota re-signed veteran Patrick Peterson, a key factor for a team that has ranked 28th and 25th the past two seasons in passing yards allowed. Chandon Sullivan and Nate Hairston were signed in free agency, but the Vikings were still unsettled at the spot.

“He’s kind of the guy that, of course we wanted to get him, because he brings a lot to the table; his competitiveness, his size, he plays at a high level, played for a really good program like our last pick,” said Ryan Grigson, a senior football advisor with the Vikings. “So, he can hit the ground running in a lot of ways as a pro.”

Booth is the second addition to the secondary after drafting Georgia safety Lewis Cine at the end of the first round.

Upgrading the secondary might be a necessity after the trades in the division.

Minnesota a day earlier had traded back from No. 12 to 32 in the first round, sending the 12th pick to Detroit, who selected receiver Jameson Williams. After Friday’s trade with Green Bay, the Packers added North Dakota State receiver Christian Watson.

Ingram is 6-foot-3 and 307 pounds and started as a true freshman at LSU. But he missed the 2018 season after being arrested on a sexual assault charge. The charges were eventually dropped and he started much of the past three seasons.

“Those are serious allegations,” Adofo-Mensah said. “We did extensive research with people in and around the situation, and around the program and around him. And we were extremely comfortable with the person.”

Asamoah is undersized (6-foot, 226 pounds) but had 80 tackles and two forced fumbles in 12 games last year for Oklahoma. Asamoah, who ran a 4.56-second 40-yard dash at the combine, is a speedy linebacker who has cover skills, but he’s likely a backup and special teamer with Minnesota.

Cine arrived at Vikings headquarters earlier to visit with team officials and tour the facility. He spoke glowingly about the satisfying opportunities his position provides to deliver punishing hits to the opposition.

“I can be all-out physical and just do me on the football field and be OK about it. When you think about it, football is a violent game. A lot of things you do in football, you can’t do in the outside world. You’ll get arrested,” Cine said.

He wanted to make clear, though, that he’s not a reckless or dirty player.

“I want to play the game safe, let me say that for sure, because now at this level the last thing I want to happen is be fined. The NFL fines people a pretty penny,” Cine said. “So, I want to be in the game, one. I want to not get fined, two, and I want to be dependable to my team, three.”