On Friday, 09-06-2019 at approx. 1:51 p.m. the Mitchell Department of Public Safety received a report that a German mortar shell was found in the garage of a residence located on the 1600 block of Bridle Drive in Mitchell.  The round was apparently found while the homeowner was moving property in the garage.   While Officers were at the scene, a neighbor who lived by this residence carried another similar mortar round to the residence and told an Officer that the neighbor wanted to make sure the round was safe.  The homeowner who found the first round had apparently talked to a neighbor about the round that was found. The neighbor stated that he had a similar round, and then brought the round to the residence.   Both apparent mortar rounds were left at the residence.  As a precaution, an Officer secured the residence where the mortar rounds were located, until trained ordnance disposal personnel could safely remove the mortar rounds from the residence. 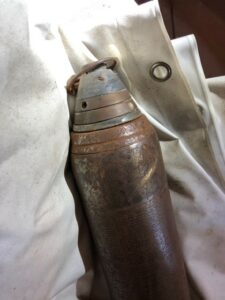 World War One vintage mortar round discovered in Mitchell

On Saturday, September 7, 2019, ordnance disposal personnel arrived in Mitchell and removed the rounds from the residence.    Ordnance disposal personnel transported the mortar rounds to the Mitchell City Landfill, where the mortar rounds were destroyed.   These items were destroyed, as there was no feasible way to determine if the rounds were live rounds and/or to disarm the ordnance, even though the items were historically significant.   Nobody was injured during this process. 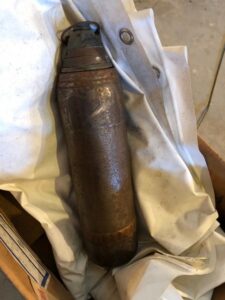 Second mortar round discovered in Mitchell

Both rounds were believed to be from the World War 1 era, dated approx. 1917.  One round was determined to be a German mortar round and the other round was a U.S. mortar round.    It appears that deceased relatives of both the homeowner, who initially reported this incident, and the neighbor who owned the second mortar round, acquired the rounds several years ago.   After destruction, ordnance disposal personnel on scene determined that both rounds were not live rounds and that the rounds had not been properly demilitarized, and had not been marked accordingly.

The public is reminded to never touch or transport anything that is believed to be unexploded ordnance or other explosives.   If you believe that you have encountered something dangerous such as this, get away from the object as fast as you can and call 911 when it is safe to do so.