It’s been years in the making, and Thursday marked the culmination of the Corn Palace Plaza project. The Mitchell Chamber of Commerce hosted a ribbon-cutting to mark the occasion. 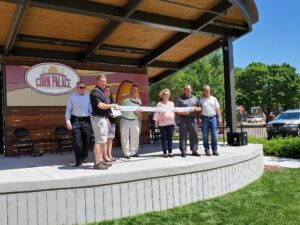 Mayor Bob Everson prepares to cut the ribbon as city and chamber officials look on.

Mayor Bob Everson says it’s more than a greenspace. “This wonderful facility stage where we can hold concerts and various things at,” said Everson. “We have a shade structure…there is a misting feature so if you’re really hot and you feel like you need to cool off, somewhere there’s a button that you can push, it’ll spray you.” 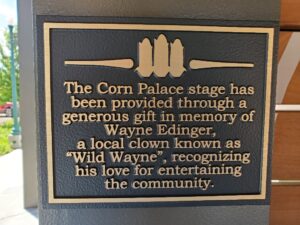 Thanks to the Edinger family

He says Sue Edinger contacted him during the project’s planning phase. “Who wanted to provide a generous gift towards the stage in memory of Wayne Edinger, a local clown who was known as “Wild Wayne”, Everson said. “Recognizing his love for entertaining the community.” 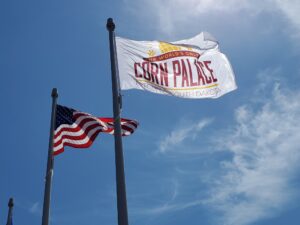 A bronze plaque backstage recognizes the donation. Plus the official Corn Palace flag was raised to cap-off the celebration.