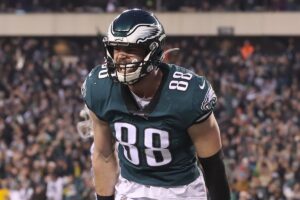 ABERDEEN, S.D. (AP) — A Florida man is accused of punching Philadelphia Eagles tight end Dallas Goedert at a bar in South Dakota, the player’s home state. A prosecutor in Brown County says the 29-year-old man is charged with misdemeanor assault and has been released on a personal recognizance bond.

The 25-year-old Goedert is a Britton, South Dakota, native. Goedert was at The Zoo bar in Aberdeen when he was punched and knocked to the ground about 1 a.m. Saturday. Authorities did not say what motivated the man to punch Goedert, who was taken by ambulance to a hospital, treated and released.