Montana town of grizzly attack a popular stop for cyclists 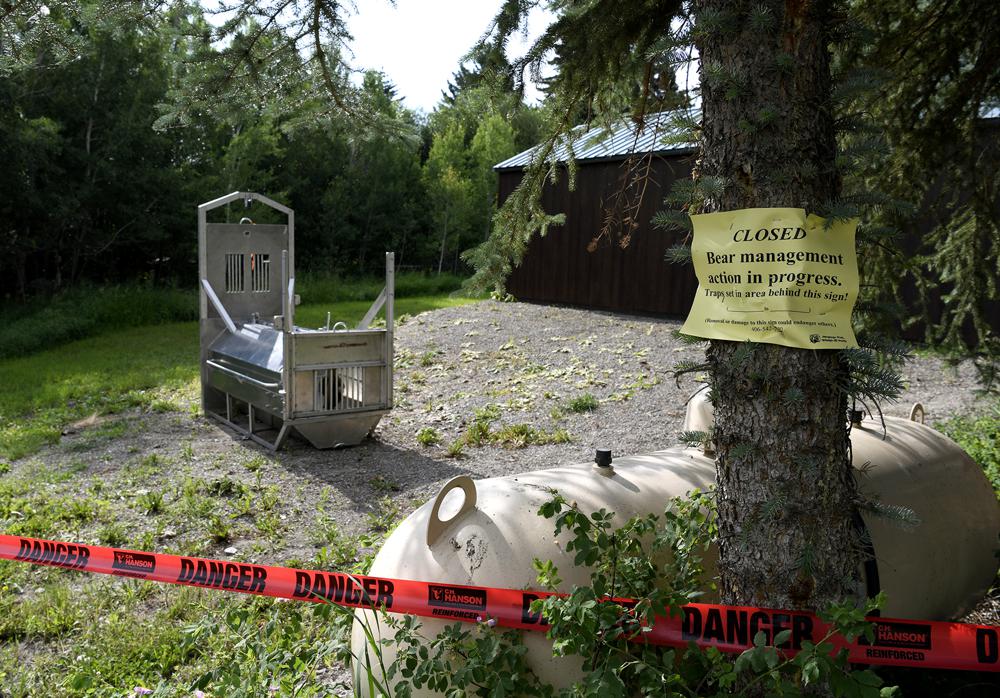 A bear trap set by Montana Fish, Wildlife and Parks sets Wednesday, July 7, 2021, in the camping area in Ovando, Mont., where bicycle tourist Leah Davis Lokan of Chico, California, was pulled out of her tent and killed by a grizzly bear early Tuesday.

HELENA Mont. (AP) — A tiny western Montana town where a grizzly bear pulled a woman from her tent and killed her this week welcomes visitors year-round to the mountain valley community along the banks of a river made famous by the movie “A River Runs Through It.”

They come to Ovando to fish, hike, camp and float the river in the summer and to snowmobile, cross country ski or snow shoe in the winter.

A break in the long-anticipated ride on that route is what brought Leah Davis Lokan, 65, of Chico, California, to the town on Monday for an overnight stay, her friends said.

She and her party were camped near the town’s post office and museum when a grizzly bear pulled her out of her tent and killed her early Tuesday, officials said. It was the second time the bear was at the campsite that night, they said.

Wildlife officials spent Thursday trying to find and kill the approximately 400-pound (181-kilogram) bear, but came up empty for a third straight day.

The sheriff closed the informal campsites around town at least until Sunday and the town opened up a fire station and church for cyclists to sleep inside. The town already had an old jail that had been remodeled with some cots for campers, said Kathleen Loendoerfer, who owns the Blackfoot Angler fishing shop with her husband, Travis Thurmond.

Ovando sees about 1,000 cyclists per year who are traveling the Great Divide route, Schoendoerfer estimated, with varying numbers staying overnight.

The route loosely follows the Continental Divide, at times zig-zagging over it on gravel roads, dirt roads and trails and some single tracks, said Dillon Key, who works at Great Divide Cyclery in Helena. There are also some highway miles.

The route is “absolutely gorgeous” through Montana, taking riders over mountain passes and through big, open meadows, Key said.

“A lot of the towns on the route, small towns in the middle of the mountains, tend to be really welcoming to divide riders coming through,” Key said. “There’s a couple farms and ranches along the way that allow riders to come stay with them. It’s kind of a communal feeling to it. Everyone’s really welcoming.”

Lokan, a registered nurse who had worked at a hospital in Chico, California, would have fit right in, said Mike Castaldo, president of the Chico Cycling Club.

“She had a really good spirit. She always had a smile on her face. Always lit up when she saw you. Always gave you a big hug,” said Castaldo, who knew Lokan for about 15 years. “But I think most of her identity was, you know, outside on the bike, enjoying the outdoors was her thing.”

She participated in mountain bike races and was a road cyclist and experienced outdoorswoman.

“I think she was competitive, but that was secondary to the journey or the adventure she was on that particular day,” he said Thursday.

Lokan had been looking forward to the Montana bike trip for months, said Mary Flowers, another friend from Chico. Lokan had taken long-distance bike trips and on this one was accompanied by her sister and a friend, Flowers said.

“She was talking about her summer plans — this wonderful wild adventure, riding her bike on, I don’t know, a 400-mile trip or something,” Flowers said. “A woman in her 60s, and she’s doing this kind of stuff — she had a passion for life that was out of the ordinary.”

Another friend remembered Lokan as a free spirit with many friends.

“She always greeted you with a smile. She was one of those people that was always up for an adventure and always made you to feel like you were the center of her attention at all times,” said Leesa Stefano, who met Lokan when Stefano moved to Sandpoint, Idaho, in 2006 and got involved in a bicycling club to which Lokan belonged.

Stefano said Lokan was the type of person who would find a way to check in with everyone at some point to make sure friends knew they were still part of her life.

“We were all really excited for her, because we know what it meant,” Stefano said about the bike ride. “We couldn’t wait to hear the stories. It’s considered an epic ride.”

Lokan and two others were camping when a bear startled them at 3 a.m. Tuesday before wandering off, Montana wildlife officials said. The bicyclists removed food from their tents, stored it and went back to sleep, officials said.

About 4:15 a.m., the sheriff’s office received a 911 call after two people in a tent near the victim’s were awakened by sounds of the attack, Powell County Sheriff Gavin Roselles said. They discharged their bear spray, and the bear ran away.

Lokan was “well versed in what she was doing. She knew the dangers,” Castaldo said, suggesting she may have let her guard down while camping in a town, rather than along the trail.

“The fact that it was right in town — that’s pretty messed up,” Thurmond told the Missoulian.

People who camp in grizzly bear country — whether deep in the woods or in a developed campground — are advised to keep food and scented products like toothpaste away from their campsites at all times and to cook elsewhere.

If a bear comes through a campsite, it’s important to stay on lookout for the animal to return, said Greg Lemon, spokesperson for the Montana Department of Fish, Wildlife and Parks.

Wildlife officials initially used helicopter flights to search for the grizzly. They also set up large traps — made out of culverts and baited with roadkill — in and around Ovando. That included traps near a chicken coop that the bear raided the night Lokan was killed, as well as near the campsite.

Investigators obtained DNA left by the bear in the attack and could compare it with any bruin they are able to trap. Bear specialists and game wardens also were stationed near the traps to shoot the animal if the opportunity arises, said Greg Lemon, spokesperson for Montana Fish, Wildlife and Parks.

“Our best chance would be if the bear comes back and tries to get another chicken or some more food around town,” Lemon said.

The wardens feel they could easily identify the bear, which was recorded on a store’s surveillance camera in the minutes after its first visit to Lokan’s campsite, Lemon said.

“If they saw that bear at the trap and had a clear shot at it, they might choose to do that.”