Noem says she is not interested in 2024 presidential run 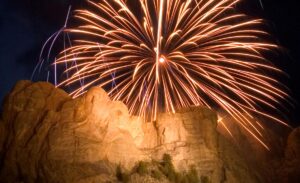 SIOUX FALLS, S.D. (AP) — South Dakota spent approximately $1.5 million for its Independence Day celebration that featured a speech from President Donald Trump and fireworks above the Mount Rushmore National Memorial. The estimate from the Department of Tourism covers all security, transportation and pyrotechnics for the event.

The fireworks display alone cost the state $350,000. But the Department of Tourism said the advertising exposure and tourism spending more than made up for the expenses.

The Department of Tourism estimates that tourism spending of $2 million brought in $160,000 in tax revenue. It also says the media coverage of the fireworks was worth about $22 million in advertising.