Mitchell Firefighters along with crews from out of town responded to a fire in a three-story home in the 800 block of East Fifth Avenue late Friday morning.

Fire Marshal Shannon Sandoval says there was smoke coming from the east side of the structure when firefighters arrived around 11:15. He says two people and two animals were inside and escaped safely. 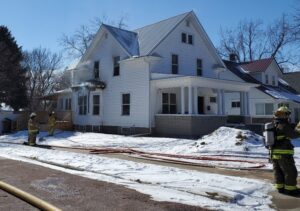 Firefighters watch the exterior of the house in the 800 block of East Fifth Avenue as firefighters inside search for fire spreading in the walls and ceiling.

Sandoval says the fire moved up the wall to the second floor. “With these old houses they’re a balloon-frame construction so it’s basically just a pathway for fire and air to move”, said Sandoval. “Which makes it a little bit more difficult than our newer structured homes.”

He says firefighters knocked down the fire and began pulling down ceilings and walls to search for spreading fire.

Sandoval says the cause of the fire hasn’t been determined as of mid-afternoon Friday.