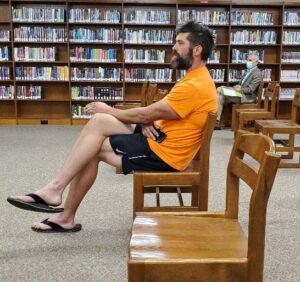 Reed Bender refused to wear a face mask as required by Mitchell School District policy. Police arrived shortly after and removed him from the building.

“You’re going to have to drag me out,” Bender told police. As he continued to resist one of the officers drew his taser. “You’ll have to tase me in front of all these people,” said Bender. He was taken outside the building. No arrest was made. No one was hurt.

Superintendent Joe Graves says it was a regrettable turn of events. “It was nothing that anyone from the school wanted to see happen,” said Graves. The board felt the mask mandate had to be enforced.

Mitchell School Board meeting at Mitchell High School as part of its annual facilities tour.

A group of parents attending the meeting argued the board should rescind its mask requirement for a variety of reasons. The board took no action on their request.