Attorney general’s trial in fatal crash may begin in August

Taming the virus: US deaths hit lowest level in 10 months

The number of lives lost per day has dropped to single digits on average in well over half the states and has hit zero on days. Confirmed infections, meanwhile, have fallen to about 38,000 day on average, their lowest mark since mid-September.

They have plummeted 85% from a peak of more than a quarter-million cases per day in early January.

The last time deaths were this low was early July, nearly a year ago. COVID-19 deaths in the U.S. topped out in mid-January at an average of more than 3,400 a day, just a month into the biggest vaccination drive in the nation’s history.

About 45% of the nation’s adults are fully vaccinated, and nearly 59% have received at least one dose, according to the Centers for Disease Control and Prevention. This week, Pfizer’s vaccine won authorization for use in 12- to 15-year-olds, in a move that could make it easier to reopen the nation’s schools.

Several states, including Wyoming, Vermont, Alaska and Hawaii, were averaging fewer than one death per day over the past week, according to data through Tuesday from Johns Hopkins. 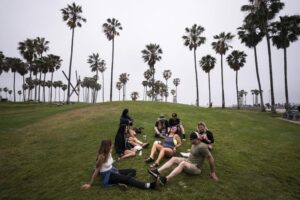